Dreaming of an Island: the Halldór Laxness Lecture 2022 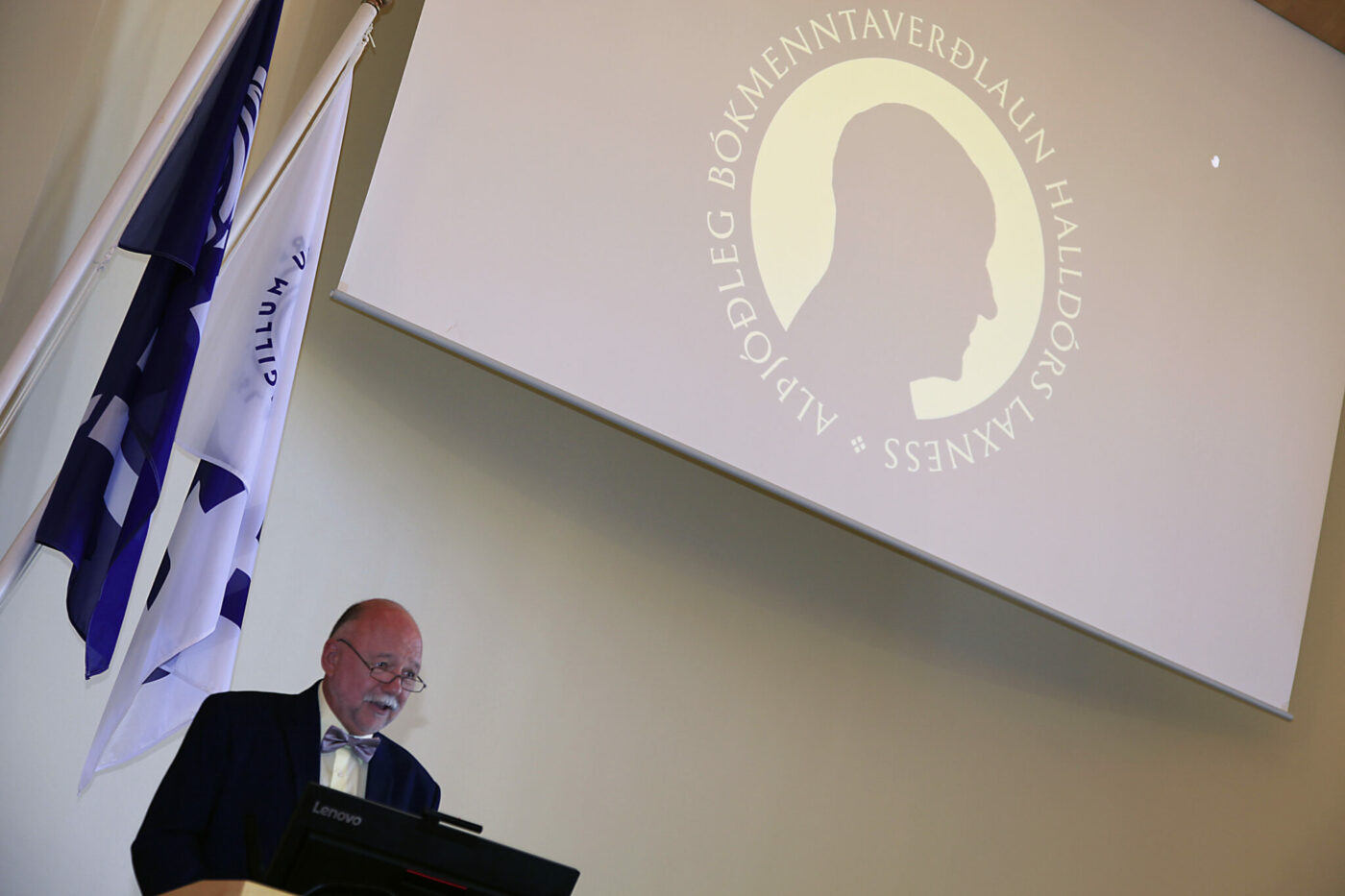 There is nothing new in dreaming about an island. But this hopeful vision continues to live and inthrall.

The dream of an island is born in the imagination of every child who envies Robinson Crusoe and his adventures. It stirs in the thoughts of a person who is burdened by stress or failure, or the pressures of the outside world, or who is threatened by an unfriendly environment or an enemy. The dream of an island can arise in the minds of an entire family, or even a whole nation so that the entire population wills the country to become an island. For a small country, this dream might even be realizable, if its borders are defined by rivers. It might even be possible to change the flow of the rivers so that they follow the borders.

Water is the perfect boundary – the best way to separate one bit of land from another. In many cultures, water represents a cleansing power or truth – able to insulate a country from falsity and from false neighbours. Water inspires a sense of stability. Looking at tranquil water calms the nerves and even the roar and the crashing of a stormy sea can inspire quiet reflection if you are safe on your own island.

But Iceland, as you and I know, does exist with all its fabulous and real attributes, with its wild and austere beauty, it’s volcanoes and geysers, and its magnificent stones. The real Iceland is different from the one that might have been invented by ancient philosophers and writers.  But who knows how far away we are from the ultimate global warming that might result in exactly these fantastic sounding changes?

Iceland does not only exist on the world map but also on geo-political maps and on maps of world culture.

I have always admired the fact that Icelandic literature is better known in Europe than the literature of some continental European countries with much larger territories and populations. I know this has been achieved by conscious effort on a state level, but I think that the geographical status of the Island has also played an important role here.

The island, or rather its water border, limits the available horizons and forces those living on the island to focus on themselves, on their thoughts, dreams, plans, and on their history and culture. And when all these thoughts, fuelled by love for the island, become a mission, then the most fantastic ambitions become ripe for implementation. That is how, I think, Icelandic culture has been built – each generation adding its layer of stones, gradually creating a mighty palace, visible from Europe, America, and Africa.

On the other hand, the curiosity of the surrounding world towards Iceland has been whipped up by this beautiful island’s remoteness and inaccessibility. The world got acquainted with Iceland through the pages of books by classical Icelandic writers such as Thorbergur Thordarson and Halldor Laxness, the world loves and reads Icelandic sagas. The world follows modern Icelandic literature.

I would like the world to follow Ukrainian literature and culture with the same curiosity, but alas, Ukrainian classical literature has hardly been translated into foreign languages ​​at all. Some of our modern authors are just beginning to attract the attention of foreign readers, but the world today is following the war in Ukraine, and not the achievements of Ukrainian culture.

The truth is that Ukraine was lucky with its geology but unlucky with its geography. Ukraine is a European country rich in minerals, with vast expanses of fertile land, which, until recently, made it possible to produce and export up to 10 percent of the world’s wheat. Ukraine has as much agricultural land as Iceland has “fish fields!” – the ocean! Ukraine’s natural wealth has bequeathed the country a history of wars, including wars for Ukrainian independence, as Germany, Russia, the Austro-Hungarian Empire, and other countries have regularly claimed Ukrainian land, Ukrainian coal, Ukrainian oil.

But there was always one aspect of Ukraine’s wealth that no neighbouring power wanted to steal – rather they wanted to destroy it – that is Ukrainian culture, the Ukrainian language, the very identity of Ukrainian which is impossible without culture and without language.

Culture is the most obvious connection between an individual and the land on which he lives. People create a culture around their relationship with the land, and by extension, with their country. The connection between a people and its territory is legitimized in world history through culture. If the culture is destroyed, then it can be said that the people no longer have anything to do with the country or with the land.

Ukrainian culture has always been an island – at times a surprisingly small island – so small that it was in danger of disappearing. For centuries, attempts have been made to force Ukrainians to forget their native language, to stop singing Ukrainian songs, and to abandon their history. For almost 400 years, Russia has been fighting against Ukrainian identity, against the Ukrainian language. In the 17th century, Ukrainian church books were banned and destroyed. In 1720 Peter the Great signed a decree banning the publication of any book in the Ukrainian language. In 1763, Catherine the Second forbade the use of Ukrainian as a language of tuition at the oldest Ukrainian university, the Kyiv-Mohyla Academy. In 1804 teaching in Ukrainian was forbidden in schools. In 1884 Tsar Alexander the Third banned theatrical performances in Ukrainian. Four years later, in 1888, he also banned the use of the Ukrainian language in official institutions and make it unlawful to give a Ukrainian name to a child at baptism. In 1892, a decree was signed banning the translation of books from Russian into Ukrainian.

In the three-hundred-year period when Ukraine was part of the Russian Empire, various tsars signed more than forty decrees prohibiting or restricting the use of the Ukrainian language in Ukraine. After the revolution of 1917, Ukraine gained a short period of independence, but already in 1921, the country again became part of the new Russian Empire – the Soviet Union  – and the process of Russification was revived with renewed vigor.

I remember how in Kyiv in the 1970s and 1980s, anyone who spoke Ukrainian was assumed to be either an ardent nationalist or an uneducated peasant. I am glad that these times are over, and the Ukrainian language has slowly begun to return to the territories from which it was expelled with the help of the Russification policy. However, the threat to Ukraine and to Ukrainian culture remains, and because of Russian aggression, the threat has now magnified.

All the policies of tzars are now being implemented by Russian President Vladimir Putin. Teaching in Ukrainian is again prohibited in the occupied territories of Ukraine, and Ukrainian books are being withdrawn from libraries there. On the territory of Russia, camps are being created for the assimilation of Ukrainians deported from the occupied territories. In these camps, they will be forcibly taught Russian traditions and customs and “turned into” Russian people.

For me today, the dream of an island, an island called Ukraine, is more relevant than ever. I wish Ukraine was an island – not disconnected from the whole world and living in isolation, like North Korea. Certainly not!  No. I would like it to be an island of security – a safe distance from a dangerous neighbour – from the Russian Federation.

Today the entire democratic world is helping Ukraine in this war – helping with weapons and humanitarian aid. But there is another way to help that does not require funding. It does require a little personal time from everyone who wants to help. Ukrainian history and culture are still little known in Europe and in the world. So, I ask you to find and read non-fiction books about the history of Ukraine. Such as Anne Applebaum’s “Red Famine”,  Timothy Snyder’s “Bloodlands” or Serhiy Plohiy’s “Gate of Europe”.  Find books by Ukrainian writers. Take the time to learn a little more about Ukraine than you know now! So that it becomes a little closer to you, despite the physical distance separating Ukraine from Iceland.

I am very grateful to Iceland for this Halldor Laxness award. I am grateful to my Icelandic publisher, my Icelandic translator and my Icelandic readers for receiving Penguin Misha here, about twenty years ago, so warmly: A warm welcome in a cool climate is exactly what a penguin needs!

But I am even more grateful to the Icelandic government for the generous support that the country provides to Ukrainian refugees, and for Iceland’s support to my country. Even tragic events can bring unexpected opportunities. Throughout the world, Russia’s aggression has generated waves of sympathy towards Ukraine, but it has also generated interest in my country. More people than ever before are willing to learn Ukrainian which has become the language of freedom itself.

Today there are several million more Ukrainian speakers outside Ukraine than there were this time last year. Ukrainian may not yet be taught at the University of Reykjavík, but I am sure that among the Ukrainian diaspora in Iceland you will find people who want to help with Ukrainian language learning – perhaps in exchange for lessons of Icelandic.

We, in Ukraine, have many stories to tell you and we want and need to hear your stories.